Here's a portion of the first chapter to give you an idea of the book's flavor. It is at the publisher's and will be available later this year.
FAMILY SECRET
by
Connie LEMONDE
CHAPTER 1
“It’s a surprise. You’ll like it. Come on.”
August, 1947 “happened” and little Michelle’s life would never be the same again.
On that day she was humming as she grabbed a handful of grain from her blue bucket and scattered them around the chickens that were scampering all over their fenced yard. One of the hens stopped, looked straight up at the girl, and then returned to her dining. Michelle smiled back at the daring feathery creature and stooped to give her some extra food.
The girl’s father, Elphège Bellerose, had been gathering eggs in the coop when he noticed his daughter through the back exit that was still open. He quit his chore and walked to the door. For a while he stood observing his child, the only female out of five children. She was a beautiful six-year old: fair- skinned, a little tall for her age, with big, curious brown eyes framed by amazing eyelashes. The yellow pinafore dress that she was wearing over a short-sleeved white blouse was a strong complement to her long, dark brown hair that was tied in back and swished around a bit with every motion that she made.
After a few minutes, he called loudly, “Michelle, come in here!”
She jerked around and stopped short at the sight of her father, dressed only in overalls and mud boots, standing stiffly in the entrance.
The day was hot and sticky, and he drew a large handkerchief from a pocket and wiped his forehead. “Why do you look so scared?” he asked. “Did you do something wrong again?”
Michelle’s blue pail swung back and forth. “No.”
“Well, then, don’t worry. I won’t hit you. I just want to show you something.”
“What is it?”
He beckoned with his finger. “It’s a surprise. You’ll really like it. Come on.”
“A nice surprise?” the girl exclaimed excitedly, as she dropped her pail and started skipping ahead. Her father had never, ever given her anything special and she couldn’t wait to see what it was.
In the doorway, Elphège turned around and faced the front entrance as he waited.
Just as the child ran over the threshold, a loud, angry cry came from the front door that had just opened.
“What in the world are you doing?” roared throughout the whole room and the walls almost shook. Michelle braked short as her grandmother ran in waving her arms helter-skelter in the air. The woman was so incensed that her face seemed to be on fire.
Click on the ORANGE title above
to see pictures of the author,
Connie LEMONDE,
and of her Québec and Franco-American ancestors.
Posted by Murmurd at 10:34 AM 1 comment:

RETINITIS PIGMENTOSA (RP)
The October 2005 issue of the JOURNAL OF HUMAN GENETICS had an article about the discovery of a new gene responsible for Retinitis Pigmentosa, a degenerative disease. The Québec population is often used for such genetic studies since only about 250 forefathers provide an ideal gene pool.
The study is under the auspices of the McGill University Health Center (MUHC) in Montréal, QC. More information is available by clicking on the ORANGE title above.
Posted by Murmurd at 9:40 AM No comments: 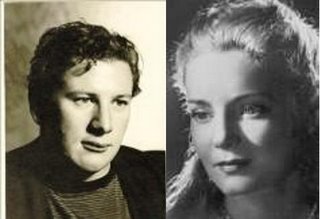 Born in Ottawa, Ontario,
educated in Québec,
SUZANNE CLOUTIER
(1927-2003)
married
Sir PETER Alexander USTINOV
(1921-2004)
in 1954
Educated in Montréal and in Trois-Rivières, QC, in 1945 Suzanne left for New York City, NY. where she became a model. Noticed by GEORGE STEVENS, the producer, she made several screen tests in Hollywood, CA. She was cast in TEMPTATION with Merle OBERON & George BRENT. Then, Charles LAUGHTON accepted her as part of his theatrical group to act in Shakespearian plays throughout the U.S. for the next 3 years. In 1949 she became a member of the JEAN DASTÉ French company to act in the great classics. In 1950 she acted in «Juliette ou la clé des songes» & then at the Edward VII theater she played the French version of one of Orson WELLS plays, LA LANGOUSTE. In 1951 she played with ORSON WELLES in the filmed version of OTHELLO. From then on, her work was non-stop. She died in 2003.
CLOUTIER Ancestry

Churches to close in SHERBROOKE, QC

Two churches in the diocese will be permanently closed on Sunday June 11. St-Jean-de-Bréboeuf, on the corner of King St. West & Jacques-Cariter St in Sherbrooke was founded in 1946. According to environmental requirements, the church must be decontaminated of all asbestos. The buyer and the parish will share the cost. Très-Saint-Sacrement, the second church in Sherbrooke to be closed, was founded in 1938. Christ-Roi church, founded in 1940, was closed last April.
Since 1995, 23 churches have been closed in the diocese of Sherbrooke.
For more information about the
diocese of SHERBROOKE,
click on the ORANGE TITLE above.
Posted by Murmurd at 3:06 PM No comments:

Marie-Paule GIGUÈRE from housewife to foundress of a religious community

This afternoon I received an email from
Bill Williams
to which was attached a file containing
MY TRUTH
his philosophical views on life.
After reading the file, I began to equate KARMA with HEREDITY, genetic, social and learned, hence, KARMY is related to GENEALOGY as far as I'm concerned. Read on and think about it. Look back on your life and try to see how your ancestors have influenced it via heredity, thus touching you with their KARMA. You are part of them and they are YOU.
Karma is continuous on all levels of existence. Karma results daily in the material world through our actions & our non-actions as well as our thoughts and emotions. We are continually, minute by minute, second by second, nano second by nano second, creating and paying off karma. It works not only on the physical, mental and emotional level, but on the spiritual level as well. When you pick up something you must eventually put it down. That is Karma
You create karma by the act of picking the thing up and the unavoidable karmic reaction comes when you are forced or choose to put it down. Note, however, that if you do not choose to put it down, you will eventually be forced to do so. Not picking it up at all will result in the karma of the thing staying in place. If it is in the way of something you are attempting to accomplish, by choosing not to move it has created bad karma relative to you. So we do create our own karma.
When you die the excess karma goes with you. You may be required to pay it back on the physical level six lifetimes from now, or in the very next life. Karma is the Law and cannot be denied.
There are many forms of karma. When and where your karmic debt comes due (is balanced) is largely determined by you. Just as when you put down whatever it is you picked up is determined by your choice. But by the same token, if you choose not to balance your karma by choice, your payment will be extracted by force (by operation of the law). You will have lost the right to choose. The law is then enforced by circumstance. Taking responsibility and acting responsibly gives you control of the karmic result and gives you the ability to correct bad choices. The key is to act responsibly in the first place.
So the evil men do does live after them. It will be here for them in the form of karma due and the entity that created it will be held responsible for it when he returns. But what about the good a man does. The law always works and cannot be denied, so the good is rewarded with good and the evil will be rewarded with evil.
Most religions teach that you will be rewarded in heaven. But where is heaven? If the Universe is moving in a more positive direction and everything is getting more positive and if the occult statement of “as above, so below” is correct, the conclusion must be that heaven is in the future.
Is your karmic reward in the future? The answer must be yes & no. Yes if you have not collected it here. No if you have. He who understands this bit of knowledge will be rewarded with great wisdom, purchased with his karma.
The Universe is based on the need to know, the ability to understand and the wisdom to use the knowledge properly. If the great Hermes spoke the truth when he said “As above, So Below,” and if our karmic rewards are in heaven (a more perfect & positive place) then so are our punishments. If karma is the rule of law then reincarnation is its vehicle. With this key the wise man can see the other half of the half-truths.
Posted by Murmurd at 4:57 PM 1 comment:

Dear Murmur, Thank you for giving me info about your blog! I had fun reviewing the stuff that you had on it. Especially meaningful for me was information that you had about the St. Vincent de Paul boarding school. My three older brothers were sent to St. Vincent for a while. My brother Bob spent the most time there. My older brother graduated and went to a regular Catholic High School in Manchester. The middle brother spent the most time there--not with the happiest of memories. But now, at least, we are all understanding the move to the boarding school! Then I was sent to the Mount for my boarding school time! Oh, well, I met the nicest bunch of young ladies there! I really loved having the time away from my family and spending it with great friends.
Thanks again for the info!
View pictures of SAINT-VINCENT-de-PAUL Orphanage and Boarding School in Manchester, NH by clicking on the ORANGE TITLE above. This will bring you to one of my albums on Webshots. There are 13 pictures posted there of the Boarding School building as well as of former students. Of course, should any of you be former students of the School and should you wish to share pictures of those days, please leave a COMMENT on this BLOG or leave a message in the GUESTBOOK of the album on WEBSHOTS.
Posted by Murmurd at 12:17 PM No comments: