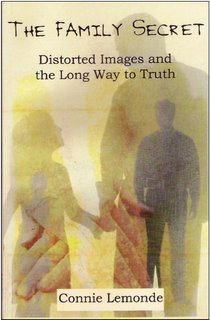 Distorted Images and the Long Road to Truth

1947 - Vermont - A Canadian-American father’s “nice/bad surprise” for six-year-old Michelle never happens but becomes the family secret that leaves her with distorted images of both her parents and sweeps her away from home to a boarding school in Canada and then to New Hampshire. In Canada she meets eight-year-old JP and together they go out looking for God. Instead, they find Ivan, an ex-convict whose life is changed radically by this meeting.

In the meantime, Michelle is sent to live with her ambitious, independent Aunt Lena and is introduced to a lifestyle that she could only dream of. But she continues to long for home and for the very doubtful love of her parents. Then, at sixteen, the “family secret” is revealed to her, and she is devastated not only by what her father had been planning but also because the incident had caused her to have such twisted thoughts about her mother and father. The truth was the opposite of what she had come to believe since she was six years old.

BIOGRAPHY of the AUTHOR
Born in Woonsocket, RI of Franco-American parents, since her retirement Connie has written 2 children’s books and has authored and produced 4 family-oriented plays for stage and one for radio. This is the 3rd book published by Infinity Publishing. The other two are a novel, BEST FRIENDS and a book of poems, UPHILL AND DOWNHILL.
Click on the ORANGE title above
to find out more about
CONNIE LEMONDE's
books
Posted by Murmurd at 3:05 PM 2 comments:

In the June 2006 issue (Vol. 134, NO. 6) of the
REVUE SAINTE-ANNE. published by the
Redemptorist Fathers of the Shrine in Beaupré, QC,
you will find an article about the descendants of
Jean RIQUART (RICARD)
The article contains a drawing of Jean RIQUART and 3 pictures of his descendants:
1) Four generations of female RICARD's
2) Mr. & Mrs. Henri RICARD of Trois-Rivières, QC
3) Gr.grandfather, Armand RICARD with 3 generations.
This article is printed in the French publication of the REVUE SAINTE-ANNE. I don't know if it is published in their English version, The ANNALS of SAINT ANNE.
For more information ,
click on the ORANGE title above
and you will be brought to brought to the official site
of Saint Anne's shrine in Beaupré, QC
Posted by Murmurd at 1:17 PM 3 comments: