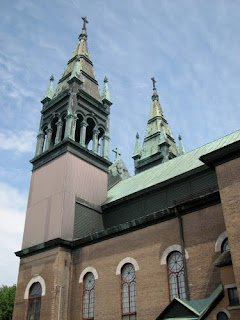 I was recently asked about St-Philippe church, located near the port in Trois-Rivières, QC. This church is slated to be sold and/or destroyed.
There was a site that was created for this church, but I have been unable to find it.

You may see photos of some of the paintings
that lwere located in the church,
by clicking on the title above.
Hopefully, the article will remain online for awhile.
Posted by Murmurd at 9:24 AM No comments:


In the Brome-Missisquoi region, the following churches have been sold (date within parentheses):

Posted by Murmurd at 8:52 AM No comments: