Dina BÉLANGER
born 1897-04-30
in Québec City, QC
was the daughter of Octave BÉLANGER (Olivier+Dina BELLEAU) & Séraphia MATTE (Joseph+Virginie DELISLE), who were married 1896-06-21 in St-François-de-Sales parish, Neuville, Portneuf County, QC.
Dina was an only child since her brother died at one year of age. Being alone, her parents doted on her & provided the best education available at the time. She had musical talent; therefore, she was sent to the New York City Conservatory to study piano for 2 years.
Dina was a very religious person & in 1921 her parents gave in to her desire to become a nun. She entered the Roman Catholic religious community of the Sisters of Jesus and Mary in Québec City, QC where her musical talent was put to good use. In religion, she was known as Sister St. Marie-Cécile-de-Rome.
Dina was of fragile health and died on September 4, 1929 at the convent in Sillery, QC.
Dina was known as a MYSTIC and suffered from the invisible STIGMATA.
For pictures of Dina BÉLANGER
and for her biography,
CLICK HERE
Posted by Murmurd at 8:47 AM No comments:

As Winds and Seasons Change 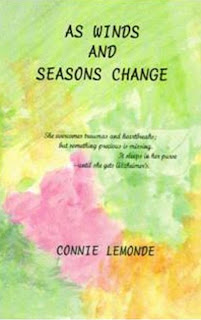 Connie LEMONDE, our Franco-American author from Woonsocket, RI, has another book available via Amazon.com and CreateSpace

As Winds and Seasons Change
is the story of a woman who overcomes traumas and heartbreaks, but something precious is missing. It sleeps in her purse....until she is plagued with Alzheimer.
Posted by Murmurd at 11:39 AM No comments: