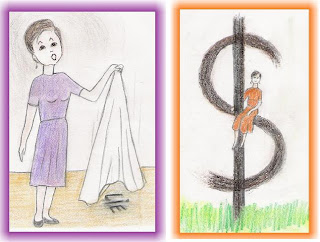 DEDICATED
To the women
who are struggling
to adjust to independent living.
The trauma of being catapulted into living alone is understood fully only by those who experience it. Most of those who find themselves in such a situation , for whatever reason and regardless of race or nationality, go through a roller coaster of emotions such as hurt, bitterness, fear, inadequacy, uncertainty, etc. and it takes a long time to adjust to their new condition and status.

For some, it’s like being thrown into a life of loneliness, resentment, and so many other emotions that struggle for attention in the mind, suffocate the spirit, and seem to go on forever. The truth is, however, that these feelings do not have to be lasting because time does heal wounds, life does go on, joy and wonder do return.

Of the millions who have gone through such a devastating change in their lifestyle, some have grabbed on to what they felt were disadvantages to living alone, and they never let go. These persons will never be able to see the rewards that independent living can bring. In fact, if they are glued to the negatives, they will probably never find contentment anywhere.

Others decided to focus on the good things that they discovered, kept their eye on these positive features, and eventually, they found that living alone, temporarily or permanently, can actually be a rewarding experience.

If you’re still grieving, disillusioned, scared, and angry, it’s probably impossible for you to believe this at this time. As the days and months pass, however, you’ll begin to appreciate some of the good features of independent living. For instance, you don’t need anyone’s approval to take a trip or go away for a weekend; you can purchase whatever you want without having to consult a partner; you can have a longed-for pet; you can come home in the middle of the night without having to account for it, etc. This freedom will never replace the person that is gone, but it may help you adjust to your present situation, and you’ll soon see yourself taking steps to a healthy transition from being two to being one.


Maybe your husband/partner wanted to handle all the finances by himself. Or maybe you just didn’t care to get involved in the abracadabra of stocks, mutual funds, CD’s, etc.

If that’s the case, find a reputable accountant or financial planner.

Better yet. Learn about managing your money. Even if you do use a professional, you’ll then be able to keep track of what he/she is doing and have a better understanding of the decisions that he/she makes to keep your portfolio healthy.

If you have only a savings and a checking account, check with the bank to see if you could benefit from CD’s or other financial instruments.

If you’re left penniless (no insurances, or they had been cashed, etc.) do not hesitate to apply for temporary government assistance. Taxpayers are always happy to help people who really need the assistance.
If you still feel guilty, and if you are well and capable, do some volunteer work until you can return to employment.
SEARCH
And you will find and unveil
The dark story
That you have been told,
Or have told yourself--
The lie that you are
Incomplete,
Incapable,
Helpless.
Recognize the lie
Accept it as such.

Then will you rise
To be your true self
And finally meet joyIn the days and years ahead.
See more of Connie, her ancestors, her work
by clicking on the ORANGE title above.
Posted by Murmurd at 7:11 PM No comments:

The BRUNELLE ancestry
is well covered in the
March 2007 (Vol. 135, No. 3)
issue of the
REVUE SAINTE-ANNE
The article begins with the arrival of Hilaire LIMOUSIN dit BEAUFORT in Québec in 1665. The LIMOUSIN and BEAUFORT surnames are no longer used.
The author has included a drawing of Hilaire and of the BRUNELLE crest. Three pictures are reproduced:
1) Germain BRUNELLE, his wife, Yvette MARCHAND with their daughter, Josée, and their son, Serge, in 1984.
2) A wedding picture of Germain BRUNELLE and his wife, Yvette MARCHAND, a teacher, taken in 1952.
3) Fr. Gérard BRUNELLE in 1984 when he was pastor of the parish of Saint-Tite.
Click on the ORANGE TITLE above
to be brought to the homepage of
Sainte-Anne-de-Beaupré Shrine, QC
where the magazine is published
Posted by Murmurd at 3:36 PM No comments: