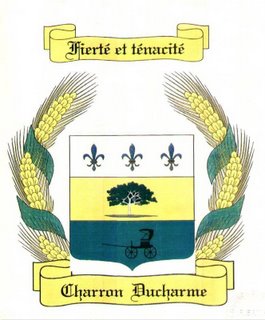 Tips for DUCHARME's
visiting
the province of
QUÉBEC
Pierre DUCHARME

Besides being the cradle of the french culture in North America, Québec is the homeland of all Ducharmes from the Charron dit Ducharme family. Needless to say that there is a lot to see and to do here for a member of our family wishing to find his roots. The goal of this short article is to highlight some of the places that are a must for a Ducharme to see during a trip in Québec.

Indeed, although every one of the 20 regions in Québec would deserve a visit, some are especially of interest for Ducharmes. Among these, Québec City, one of the oldest towns in North America, and the only one still surrounded with walls, Montréal, our main city, and most of all the area called Lanaudière, around the towns of Berthier and Joliette, on the North Shore of the Fleuve St-Laurent (St-Laurent River).

Lanaudière is without doubt the homeland of Ducharme families. Almost every village there is full of memories of our forefathers. Most likely your direct ancestor, the one who left Québec for the United States a few generations ago, was born in one of the following places : Berthier, Ste-Élisabeth, St-Thomas, St-Félix-de-Valois, Ste-Mélanie, St-Paul, St-Jean-de-Matha, etc. But let’s begin with the beginning.

First of all, it is important for you to gather as much notes as possible on your ancestors, so you will know exactly the places that you would like to visit. Be sure to pinpoint the places where they were married or burried, for instance. Likely, the churches still exist, and it may be even possible to find the graves of some of them in old cemeteries.

Then, if you have access to internet, I suggest that you look at the web site of « Tourisme Québec » (http://www.tourisme.gouv.qc.ca/) and « Tourisme Lanaudière » (http://tourisme-lanaudiere,qc.ca/). These bilingual sites will give you access to maps, as well as places to stay according to your needs.

Among other documents available from these offices : pocket-size guides for each region, including Québec, Montréal, and Lanaudière of course. I suggest that you ask for these handy guides, that will give you details on every town and villages, and suggest roads and tours, places to see, restaurants and hotels, etc.

Coming from any point in the United States, you will like to first come to Montréal, following (in the other direction) the road that your ancestor took to leave Québec for the USA. Located on an island, Montréal is a large town (2 millions inhabitants), but nevertheless the athmosphere is very friendly and safe. Don’t hesitate to take the Métro (subway) to visit the town. It’s fast and unexpensive.

I suggest that you find an hotel or a bed & breakfast not too far from the « Vieux Montréal », that is Old Montréal. Our first ancestors, Pierre Charron and his wife Catherine Pillard, landed here between 1662 and 1664. Each street in the « Vieux Montréal » has a long story; take the time to browse. But be sure to visit Notre-Dame church, on Notre-Dame street: Pierre and Catherine were married there on October 19, 1665 (that is in the first church built on the site), and also buried in the cemetery that is now just under the actual church. Also in that part of the town are the « Archives Nationales » (National Archives), where you can find actual copies of birth, marriage or death certificates of your ancestors (see below).

I suggest also that you visit "Ferme St-Gabriel", a few minutes from the Vieux Montréal. The "Filles du Roy" (King’s daughters, as Catherine Pillard was), were received there before their marriage. The house goes back to 1698 or so, and is the oldest in Montréal. Daily visits are most interesting. The museum of Pointe-à-Callières is also a must, as well as the Bonsecours Chapel, and many other places. Walk alongside the river, follow St-Paul Street, and take the time to drink a coffee (or any other beverage, for that matter!), on Place Jacques Cartier. Remember : your ancestors walked these streets in the XVII century.

Back in 1665, Pierre and Catherine’s first land in Montréal was located in the eastern part of the town, at a place known as Longue Pointe, an very early settlement on the Island of Montréal. Although there is nothing much to see now, you may like to walk in their steps, and at least stop to see this land. Take Notre-Dame street heading east, up to the spot where the autoroute 25 (highway 25) crosses the Fleuve St-Laurent : the land of Pierre and Catherine was just there. Details on this land were published in « Le Trait d’union » (volume 8, no 2).

After selling that first land, Pierre and Catherine moved to the other side of the Fleuve St-Laurent, in Longueuil, to a land that was also described in « Le Trait d’union » (volume 5, no 3). You must cross the Jacques-Cartier bridge to get into Longueui, also an old town. Take the time to walk on St-Charles Street, around St-Antoine-de-Pade church.

Leaving Montréal heading toward Lanaudière, take autoroute 40 east, that will bring you in 45 minutes to Berthierville (also known as Berthier). If you have more time to spare, you can alternately take road 138 east, that will bring you to Berthier alongside the Fleuve St-Laurent. This road, the oldest in Québec, is called the "Chemin du Roy" (King's road), and your ancestors certainly took it more than once; before getting to Berthier, road 138 will bring you to Lavaltrie and Lanoraie, where may Ducharme’s lived in the past and still live today. Many antiques boutiques on raod 138, by the way.

When in Berthier, be sure to visit first Ile Dupas, one of the islands between Berthier and Sorel, that you can access to with your car. This will bring you suddenly hundred of years ago. Francois Charron dit Ducharme, son of Pierre Charron and Catherine Pillard, the first one to use the nickname Ducharme, raised all his family on a small island near Ile Dupas. This island is still known as «Ile Ducharme». Yet, unfortunately, no access by car to this island is possible. But be sure to see the church on Ile Dupas, where a few of the children of François and Marguerite were christened.

Going back to Berthierville, take a look (and visit, if possible) St-Genevieve church: almost every member of the firsts generations of Ducharmes after Francois were married there, for almost a century. A few other places are worth a visit in Berthier, like the Cuthberth Chapel. Old houses in Berthier (and all Lanaudière in fact) are typical of French Regime house-building. The villages themselves are also typical : they are built around the church, which is often a work of art by itself.

From Berthier, follow Route 345 heading toward Ste-Élisabeth. The road follows a river, which is called Rivière Bayonne. Just after leaving the city of Berthierville, there is a covered bridge on Rivière Bayonne, to your right, that is nice to see. The church in Ste-Élisabeth is new, the old one having burned in 1955 or so. But beside you will see the old presbytery and, behind, the cemetery, where many members of our families are burried.

Keep on road 345, heading for St-Félix-de-Valois. This must be the place in the world where the largest number of Ducharme lived and died. Take a look at the church, and also at the cemetery behind, just to check if I am right! St-Félix church is very typical of churches in Québec. Take some time to walk in the village.

From St-Félix, you can take road 131 north to visit St-Jean-de-Matha, Ste-Mélanie (where our member and friend Doug Ducharme’s ancestor came from at the end of the XIX century), a very nice village on road 348, or go to any other villages in the area. After browsing, many roads will bring you to Joliette, the main town in the area. The cathedral is very impressive, for a town of that size. While there, you can visit the art museum, specializing in religious art.

From Joliette, you can take road 31 south to go back to autoroute 40 or road 138. From there, you can come back to Montréal, or go east to Québec City (about 2 hours from Berthier). The purpose of this article is not to described Québec City, but it is certainly a must to visit. While in Québec City, be sure to go around the Ile d’Orléans, in front of Québec. From this place, you will see Québec’s Cap Diamant exactly like our ancestors coming from France saw it 350 years ago.

Other regions to see.

As said before, most Ducharme's come from Lanaudière. Most, but not all. For instance, a few lived in St-Eustache, north-west of Montréal : they were Louis-Joseph Ducharme, son of Louis and Scholastique Renaud, who married there Véronique Presseau in 1802, and their own son, Louis Ducharme, who married Marie-Anne Leclair in 1828. Louis and Marie-Anne left Québec soon after the 1837 rebellion, Louis being a patriot. They are the ancestors of many Ducharmes from Wisconsin, including our member and friend Craig Ducharme.

The actual St-Eustache church is exactly as it was then : check the marks of the bullets on the frontwall. Likely, Both Louis and his son were inside when the British gave the final assault. Take the time to walk in the old village.

While visiting Montréal, you may want to do some researchs on your ancestors. One of the best places to do so are the « Archives nationales du Québec ». Our national archives are kept in different locations, but documents for Montréal and Lanaudière areas are kept in Montréal. The Montréal’s office address is 535 Viger Street east, in Old Montréal.

You will find there microfilms of all parish registers up to 1900, marriage contracts, wills, birth, marriages and burials repertories, genealogical dictionaries like Tanguay and Jetté, and many other documents. Researchs are free, and employees are very helpfull. You can make copies of most documents for a dollar or two (canadian dollars, that is), or even for a few cents when microfilms are concerned.

Of course, these are only a few notes. There are many other interesting places to see, and of course many things to do. Is your ancestors are mainly from Québec, you may also want to look for other sides of your family. This will bring you in other regions.