If you intend to visit Montreal this summer, the Grévin Museum is worth a visit. It depicts the history of New France (Québec) via persons, who helped forge Canada. Among these historical figures, you'll see:

1) KATERI TEKAKWITHA, whom Pope Benedict XVI canonized in Ocober 2012. She died in 1680 at the Kahnawake Reserve on the south shore of Montreal near Châteauguay, QC.

2) St. MARGUERITE BOURGEOYS died in 1700. She founded the Roman Catholic religious order of the Contregation of Notre-Came in Montreal, QC.

3) St. MARGUERITE d'YOUVILLE, d. 1771 and was the first Canadian-born person to be canonized by the Roman Catholic Church. She founded the Sisters of Charity of Montreal, commonly known as the Grey Nuns.

6) PADRE PIO, although not a Canadian but an Italian, is also featured at the museum. He was a mystic and healer who was born in 1887 and died in 1968.

To discover more about the founding of NEW FRANCE
and to get to the GRÉVIN museum,
take the underground METRO,
and
get off at the
McGILL station.

GENEALOGY and where it can lead you

GENEALOGY
took a surprising lead in the work of researchers
Michael BAIGENT,
Richard LEIGH ,
Henry LINCOLN
in their book which brought them to France and to our French-Canadian ancestry.

Published in 1982,
THE HOLY BLOOD AND THE HOLY GRAIL
gave rise to many queries and comments, some for, others against. Of course, the authors then had to publish another book in reply...

THE MESSIANIC LEGACY (1987)
and later...
THE DEAD SEA SCROLLS DECEPTION (1991)
and finally...
THE JESUS PAPERS: EXPRESSING THE GREATEST COVER-UP IN HISTORY (2006).
These publications are for serious researchers of genealogy & not for faith-filled believers!!!
Posted by Murmurd at 11:02 AM No comments: Links to this post

The MORMONS and GENEALOGY

The Latter Day Saints
commonly known as
the MORMONS
are well-known as having created the world's largest family database.
Most persons, who have dabbled in family ancestry, know this and have used the LDS database for their research. For this reason, I think you may be interested in the 2007 publication of a book written by
Donald AKENSON
If you have done any family research,
look up
SOME FAMILY; THE MORMONS
AND HOW HUMANITY KEEPS TRACK OF ITSELF.
Read more »
Posted by Murmurd at 9:10 AM No comments: Links to this post

Unfortunately, WEBSHOTS was sold in 2012. The new owners changed the format & usage of the site when it became WEBSHOTS SMILE. The 2,000+ family pictures, etc. that I had there are no longer available & I've not found a comparable site where I may upload them. I barely managed to save the pictures, thanks to a friend.On the other hand, the identity of many of the individuals may be lost.
The work of 12 years is almost all lost, but I do want to thank everyone, who shared their pics with me & who allowed me to share them with you via WEBSHOTS.
Please don't write to tell me about possible sites where I may upload the pictures. I've seen them all & none, thus far, responds to my needs. Maybe eventually, a programmer will create another site that will have the amenities that the former WEBSHOTS had.
Some of my previous, older posts may contain a link leading you to the original WEBSHOTS.Of course, they'll lead you to nowhere. Sorry about that...but I can't do anything about it at the moment. And, I don't know if I'll have the courage to start this venture anew. At least the pictures of our ancestors were available for many years & now I don't know what the future will hold for them.

Posted by Murmurd at 9:37 AM No comments: Links to this post 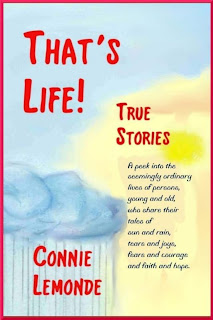 Connie LEMONDE's
latest publication
available on
Amazon.com
You may read these biographies as they were shared on C'EST LA VIE, Connie's 5 minute, English radio program. Hard copies of Kindle copies of most of Connie's books are available, as is her latest, THAT'S LIFE!
Let's encourage ouf
favorite Franco-American writer...

Posted by Murmurd at 9:08 AM No comments: Links to this post